If you have spent time in the U.S. Virgin Islands, particularly St. Thomas and St. John, you have likely come across the popular resident, the iguana. And if you have not – maybe you will see one on your next visit.

Iguanas are a type of lizard; they are native to tropical areas of Central and South America and the Caribbean. They include some of the largest lizards found in the Americas, some species growing to about 4.9 feet in length from head to tail. The tail is responsible for much of the length. Species of iguanas vary greatly in size, color and behavior; the variation so great that you might not recognize some as being members of the same family.

The iguanas found in the U.S. Virgin Islands are the Green Iguana. Studies conducted on iguanas have lead scientists to believe that the Green Iguana species originated in South America and over time spread through Central America and the Caribbean. How did the iguanas travel between islands -by raft! This comment might receive some chuckles but it happened recently. See, after a hurricane in 1995 a group of Green Iguanas was found living on Anguilla, an island where the species had never been previously recorded. Biologists believe that the new iguanas had floated on clumps of tree debris (a natural raft) from a neighboring island at least two hundred miles away. Some people also suggest Amerindians might have helped introduce them on various islands, as they brought them along on journeys between islands as a food source.

Now that you know how they might have gotten to the U.S. Virgin Islands lets take a closer look at the Green Iguana and answer some questions you might have about them! 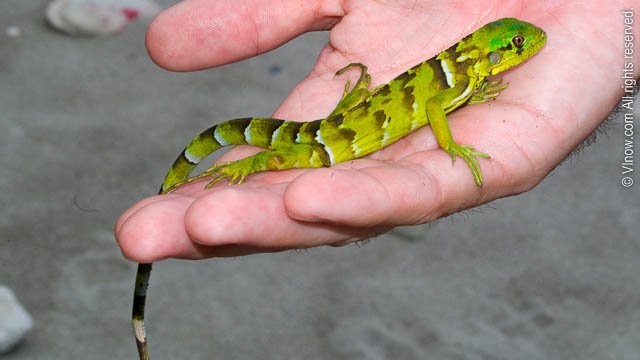 Green Iguana – does that mean they are green? Not exactly, Green Iguanas can be other colors. In the U.S. Virgin Islands, and in other locations, baby Green Iguanas have the brightest green color – a florescent green. The juveniles are also bright green. Older iguanas however tend to have a darker olive green coloring with brown, and they can have black markings.

Living on an Island, can they swim? Green Iguanas can swim, but they are not as proficient a swimmer as their cousin the Marine Iguana in the Galapagos Islands. Green Iguanas live in trees and are often found near water. They are excellent climbers, and should they fall they use their claws to grasp branches to help break the fall. This technique helps them land unhurt when falling short distances.

They look like mini-dinosaurs? Are they dangerous? Iguanas do have an ancient lizard look going for them. They have a row of spines on their back and down their tails; this actually helps when defending themselves against predators. Another defense mechanism is their whip-like trails, they can deliver painful strikes. Iguanas, like many other lizards, can allow their tails to break if being held by the tail. This allows them to escape; their tail will eventually grow back. Another interesting feature on iguanas is the dewlap, the flap of skin below their chin. It helps regulate body temperature. The dewlap has another purpose. Although a large iguana bobbing its head, dewlap expanded, can look quite menacing to predators and to humans, it is used by males during courtship. Apparently female iguanas find the dewlap attractive.

Whether they are dangerous, suppose they could be if provoked into a Hulk-like rage where they turn into T-Rex. Just kidding!! Green iguanas if frightened or threatened will try to get away. If cornered they will rise on their legs, stiffen their body, bob their head and might hiss. If you are trying to take a photo of an iguana and are approaching it and it reacts in this way – you are too close and should back up. If the iguana feels that the treat is persisting they can lash out with their tail. Again if they have a way to exit a situation when they are approached and feel threatened they generally take it and run away.

Iguana Xing Signs: You will not see any Iguana crossing signs, though they might be helpful. Sadly it is not uncommon to see iguanas as road-kill when driving around the islands. Iguanas are cold blooded and in an effort to regulate their body temperature they often seek out warm objects to lie on or open areas to bask in the sun; for example pavement, roads and rocks. This activity puts iguanas at risk of getting hit by cars, being open to predators and to humans. When driving around the island keep an eye out for these big lizards and give them the right of way when they are crossing. If they are just lying there usually a honk will get them running into the bush.

What do they eat? They are primarily herbivores and feed on leaves, flowers and fruit. Iguanas have sharp teeth which they use to shred leaves.

If I wear red toe-nail polish I hear iguanas might come around, is that true? Iguanas have excellent vision allowing them to detect shapes and motions at long distances. The red nail polish might make an iguana think your toes are small fruit or flowers and they might come around to check it out. This is possible and it has happened however it’s not probable unless you are in an area where iguanas have gotten used to people like at some beaches and some open air restaurants. Again iguanas generally run away. If you are in an area with iguanas very close by, are wearing red toe nail polish barefoot or with open toe shoes and plan to be sitting or lying still for a while then cover up your toes to avoid any possible unwanted attention from an iguana.

PS: Don’t feed the iguanas, this gets them used to people and to hand outs. They can find food on their own, human food may not be healthy for them as its not naturally in their diet and losing their natural fear of humans makes them both vulnerable to possible harm and can make them nuisances to people who rather not have an iguana in very close proximity.