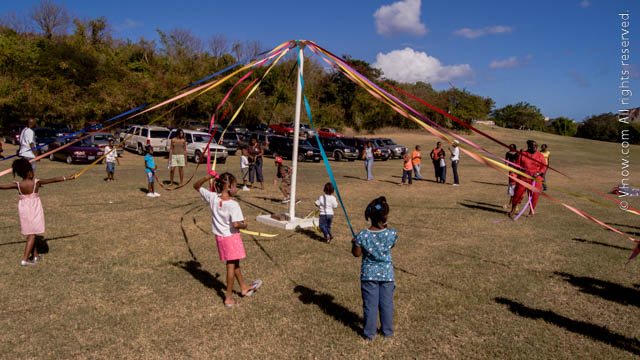 Caribbean and American, that is a description of culture in the United States Virgin Islands. You will find fast-food restaurants like Subway and McDonalds next to local restaurants serving pates and boiled fish. You will find large grocery stores selling everything from Campbells Soup to Sara-lee pound cakes. Around the corner from the grocery store will be a fisherman selling a fresh catch from his truck. On the radio you can hear calypso music, reggae, American pop, salsa, blues, oldies, rock and roll and many other genres. Florida oranges and strawberries are sold as are kenips, mangos and coconuts.

Fashions include jeans, t-shirts, jerseys, polo shirts and other Western style dress. Local sports enthusiast watch and play baseball, basketball and football. And CNN news is broadcasted daily and discussed just as often as local gossip. Together the American and Caribbean combination makes the United States Virgin Islands a unique and interesting place.

English is the main language in the USVI and the majority of the population speak, write and read English only. Some residents speak quickly and with an accent making it difficult to understand. Emigrants from other islands have brought other languages to the Virgin Islands therefore it is not uncommon to hear Spanish, French-Patois and Creole.

Music in the Virgin Islands is definitely Caribbean. You can hear reggae, steel pan, calypso and soca. Many other music venues can be enjoyed from Latin and blues to jazz and classical.

Virgin Islanders are religious people. Popular religions include Baptist and Catholic. Superstitions and storytelling are very common. There are often stories about jumbies (spirits) that walk around in homes, on the street and anywhere the person telling the story wants them to be. Jumbie stories are a Caribbean tradition and are often used as cautionary tales for children. Bru Nansi, a spidery-man who prevails in the most adverse circumstance, is a popular story character.

In the Virgin Islands saying Good Morning, Good Afternoon and Good Night are not the same thing as saying Hello or Hi; the former is a warmer greeting and is the norm for friends and strangers.

While visiting the islands take your time to appreciate the local arts, events and music. Definitely try some local food, desserts and drinks, you will enjoy them. Make your vacation a true Caribbean experience by enjoying the local culture!

Colorfully costumed stilt dancers, like the one in the picture above. They can be seen at carnival parades and other local events. The word jumbie refers to ghost-like spirits of West African belief.

Is a style of music and dance. The musical sounds that are danced to are made by scratching instruments made of hollowed out gourds. The band is called a scratch band.

Are a type of fruit. They have a green outer shell and a fleshy edible meat around a large seed inside.