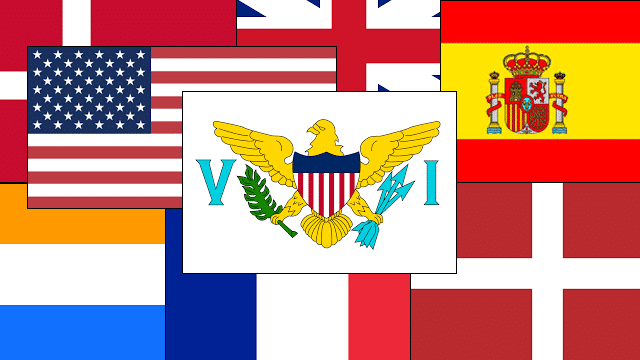 The first residents of the present United States Virgin Islands (USVI) were the Ciboney, Caribs, and Arawaks. In 1493, Christopher Columbus visited these islands. He had been searching for a route to India and consequently he called the people he encountered Indians. Columbus named the beautiful islands ‘The Virgins’ in reference to the legendary beauty of St. Ursula and her 11,000 virgins.

The period after Columbus’ visit was quiet as far as exploration and colonization is concerned. Explorers as late as 1587 reported evidence of Indian habitation however settlers by 1625 reported not finding Indians. It is believed that Spanish settlers on nearby Puerto Rico raided the islands on a regular basis. Some Indians were forced to work while others fled. Indian groups lived throughout the Caribbean, however European exploration and colonization brought demise to the indigenous groups. They had no immunity to European diseases and were not prepared to deal with the harsh labor they were forced into. Within several decades following colonization of the Caribbean, Indian populations had plummeted. Today they are found on reserved lands on only a few islands. They no longer exist in what is today the USVI.

In the early 1600s many countries took interest in the Caribbean and in “the Virgins”; Holland, France, England, Spain, Denmark and the Knights of Malta all sought colonies. England and Holland colonized and jointly inhabited St. Croix in the 1620s. The neighboring Spanish on Puerto Rico invaded the small colony; the French then quickly moved in, removing the Spanish and taking over themselves. St. Croix remained a French colony until 1733.

The Danish West India Company first attempted to settle St. Thomas in 1665. They successfully established a settlement on St. Thomas in 1672 consisting of 113 inhabitants. They expanded and settled on St. John in 1694. The Danish had claimed St. John as early as the 1680’s, however hostility from the neighboring British on Tortola prevented the Danes from establishing a settlement. The British, in order to maintain hospitable relations with Denmark, eventually ceased their opposition. After the Danes settled St. John plantation agriculture developed rapidly.

In 1685, the Danish government signed a treaty with the Dutch of Brandenburg. This treaty allowed the Brandenburg American Company to establish a slave-trading post on St. Thomas. Early governors also approved of St. Thomas becoming a pirates’ safe haven. The governors realized an influx of pirates would benefit local merchants. While piracy ceased to be a factor in the island’s economy in the early 1800s, the slave trade continued.

In the Danish West Indies slaves labored mainly on sugar plantations. Cotton, indigo and other crops were also grown. Sugar mills and plantations dotted the islands hilly landscapes. Each islands economy prospered through sugar plantations and slave trading. While St. John and St. Croix maintained a plantation economy, St. Thomas developed into a prosperous center of trade. Slave rebellion on St. John and St. Croix are well documented. Legitimate trade and business on St. Thomas influenced a different society where many more slaves were given freedom and an opportunity outside of plantation life.

A July 2, 1848 rebellion on St. Croix, where some 5,000 blacks were free while another 17,000 remained enslaved, prompted liberal governor Peter von Scholten to declare what he had long pressed for, that all unfree in the Danish West Indies were from that day free. While his proclamation was in direct contradiction of the King’s orders and while plantation owners refused to accept the proclamation, slavery was abolished on July 3rd, 1848.

Strict labor laws were implemented several times after emancipation and the populous reacted in tense labor riots. Planters began to abandon their estates and the population and economy in the islands declined. The islands and its residents fell on rough times in the late 1800s due to the poor economy and numerous natural disasters.

The islands remained under Danish rule until 1917, when the United States purchased them for $25 million in gold in an effort to improve military positioning during critical times of World War I. St. Croix, St. Thomas and St. John became the US Virgin Islands.

While conditions improved, change came slowly and frustrations brewed. Residents felt deceived when they were not granted American citizenship immediately following the transfer and disappointment also existed in that the islands were run by Naval administrators and appointed officials.

The Military and the Interior Departments managed the territory until the passage of the Organic Act in 1936. Today the USVI is a U.S. territory, run by an elected governor. The territory is under the jurisdiction of the president of the United States of America and residents are American citizens.

In 1956 Laurance Rockefeller gave the National Park Service a generous gift of 5,000 acres of land on St. John. This gift along with subsequent additions have increased the holdings. Today almost two thirds of St. John’s beautiful forest, shorelines and underwater lands are protected by the Park. Historical and marine treasures on St. Croix including Buck Island are also protected by the Park Service, as are portions of Hassell Island.

In 1996 Water Island, located in St. Thomas’ Charlotte Amalie harbor, was officially returned to the USVI from the Department of the Interior. Today Water Island is the fourth United States Virgin Island.

In the mid 1900s the Virgin Islands saw the dawn of new times, more prosperous times. Tourist seeking the the warmth, beauty and relaxation the USVI offers, vacationed in the islands. Hotels, restaurants and shops began popping up on beachfront properties and in main towns. With the rise in business and economy came a rise in the population as immigrants from neighboring islands flocked to the USVI to work. Today the population of the USVI is made up of people from all over the Caribbean. The islands entered the new millennium as one of the premiere destinations for tourist visiting the Caribbean.