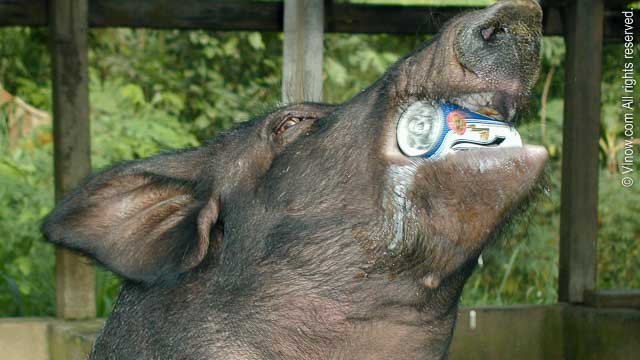 “A rainforest in the Virgin Islands… A truly local bar, complete with thatched roof and compact dirt floors… Beer drinking pigs… Where are we?”

Tucked into the rainforest on the west side of St. Croix is a little bar, Mt. Pellier Hut Domino Club. A thatched roof covers what is in all accounts a jungle bar, and has often been called such. Tables with decks of cards and dominos await those that seek the unique atmosphere of the place. Locals love it there. Norma, the hostess, is easy going and keeps the beers cold and the “Mamma-wanna” handy. JJ and Oreo, the main attractions, can drink you under the table!

It all started over 20 years ago. George and Norma, the owners of the place, were farmers. They had many pigs and had decided to downsize on the number. They had sold almost all of them; Ms. Piggy and Buster Pig were kept. Folks would come by the property from time to time, and it happened one fine day that a visitor walked passed Buster, with a beer in his hand, and Buster helped himself!! A star was born. As time would have it, folks kept coming by to visit George and Norma, to have a beer and play dominos and so developed the Domino Club! Visitors would give Buster a beer for sport, since he had indicated his liking for it the day he lifted his first one! Combine the two and you have the Beer Drinking Pigs of the Mt. Pellier Domino Club!

Buster is now gone, a small monument in his name is on the property. His son JJ and grand-daughter Oreo have taken over the show!

Bet you are still wondering – how do JJ and Oreo get the beers, how do they drink them? Visitors to the Domino Club can buy JJ and Oreo a round of non-alcoholic beers at $2 a pop and $1 a visitor. JJ and Oreo are kept in a pen across from the bar and restaurant. They are pretty well use to the treats and if they aren’t already front feet up on the gate head stretching out to you for the beer, then a simple tap on the gate to get their attention is all that is needed. Put the un-opened beer can in their mouth, and they take care of the rest. Breaking it open, guzzling the contents and throwing the beer can on the ground, just like a pig would!

So next time you are on St. Croix, pass by and say Hello to Norma, buy JJ and Oreo a round, and enjoy the unique atmosphere of the Mt. Pellier Domino Club.