The Story of Larimar 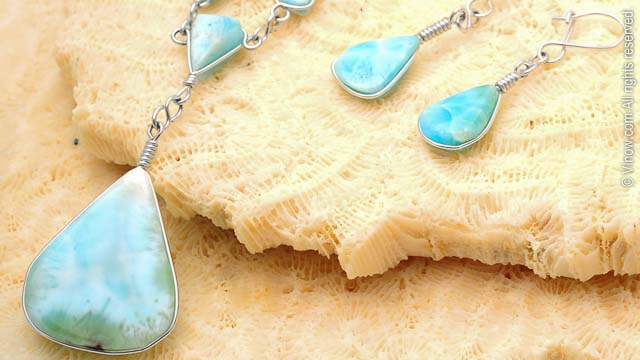 Larimar or blue pectolite is an extremely rare gemstone. It has been found only in one location: a mountainous, relatively inaccessible area in the province of Barahona in the Dominican Republic. The first mention of the stone is in a request to mine Larimar in 1916, however it wasn’t until 1974 that the stone really made an appearance.

In 1974, Norman Rilling, a member of the U.S. Peace Corps, and Miguel Méndez, a Dominican found pieces of Larimar on the seashore. The word Larimar was created by Mendez, who combined his daughter’s name Larissa with the Spanish world for sea, Mar.

Before Mendez and Rilling, local inhabitants of the region and their ancestors had long been aware of the stone. Early theories suggested Larimar was produced by the Sea, later by the earth’s volcanic movements. Island legends said that the stones could be collected easily on the beach, but one day there were no more blue Larimar stones left. Locals explored upstream and found a rock formation, which appeared to be the source of the blue stone. This legend holds truth; Mendez and Rilling in 1974 would follow a river upstream and find sources of the blue stone.

Most small blocks of Larimar are in situ, meaning they exist in the very place where they formed. However, through soil erosion some pieces broke off and were moved by rainfall down the slopes of the hillsides to rivers. The river deposited them in the Caribbean Sea, some pieces washed up on the seashore by waves.

The stone is formed when hot gases push crystallized minerals up though volcanic ‘tubes’. In order to mine and excavate the stone miners must identify these tubes and dig deeper and deeper into old volcanoes. Larimar is used most often to make jewelry but has also been used to make beads, decorative objects and even handles on cabinets.

Larimar is considered a healing stone and said to be finely tuned to the human body particularly to the throat area. It is said that it increases speech and communication skills and supports the body’s natural healing process. Persons believing in this have been known to wear Larimar jewelry or to put pieces of Larimar in their pockets or under their pillows. Larimar is also called the Atlantis Stone, because a Spiritual master who lived in Trinidad and Tobago and who founded many Yoga Centers across the world, claimed that some islands in the Caribbean including the Dominican Republic were part of the lost continent of Atlantis. He went further to say that on one of those islands a blue stone with healing powers would be found – a description that corresponds to Larimar. Today, there are thousands of people, naturalists and persons practicing alternative and holistic healing methods, who use Larimar to assist and reinforce healing processes.

Larimar jewelry is very popularly throughout the Caribbean. You can find it incorporated into necklaces, bracelets, rings and earrings. When visiting the Virgin Islands keep a lookout for this Caribbean gem as it can be found in many jewelry stores or order online below.