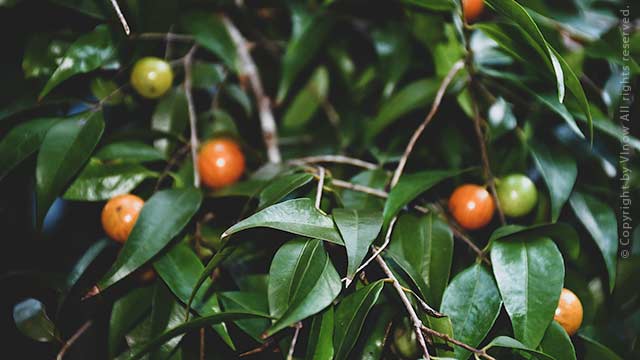 People in the Caribbean began making Guavaberry liquor centuries ago by mixing together guavaberries, rum and sugar. It is most popular in the Virgin Islands, St. Maarten and in the Dominican Republic’s eastern town of San Pedro de Macoris which has a large population of Eastern Caribbean descent. The liqueur has a fruity, spicy, bitter yet sweet taste. It is very hard to find outside of the Caribbean.

Though the name might imply relation to the guava, guavaberry is a different tree and fruit. The trees bear small fruit, about the size of a blueberry. They grow on various Caribbean islands and a few areas of Central and South America. The guavaberry tree is related to the clove and eucalyptus. They tend to grow wild and are considered hard to cultivate. They are sensitive to winds, rainfall and insects; some years without the right conditions a tree might not bear any berries at all. If they bear fruit they usually ripen around September-October. When unripe the berries are green; when ripe they can be either a yellowish-orange or a very dark red to a blackish purple. The berry has a thin skin and the seed is surrounded by a layer of juicy, bitter-sweet flesh that is highly aromatic.

Where you can find Guavaberries

Guavaberry trees can be found on the Northside and West End of St. Thomas, the Bordeaux Mountain area of St. John and in forests on St. Croix. Due to the small size of the fruit and limited supply people often freeze what they find. Once a sufficient quantity is gathered they are used to make jam, tarts and most famously to produce the Christmas beverage Guavaberry Rum.

In the Virgin Islands handmade Guavaberry Rum is produced using family recipes. The drink is made of rum, spices like nutmeg and cinnamon, sugar, guavaberries and a few other secret ingredients! Traditionally the ingredients are placed together in a large glass demijohn and put away to blend for several weeks until Christmas of that year, or for better blending and aging until the following year.

It is considered a special part of local tradition and culture. Mention Guavaberry to an older member of the community and a sense of nostalgia takes over of Christmas in the old days and of community. Holidays of yesteryear often included friends and family caroling house to house within their circle or neighborhood. The stops included a few snacks and a drink, most often a small sample of the family’s Guavaberry Rum.

Today Guavaberry Rum is still a very important part of Christmas celebrations. Families during the holidays often have discussions about who has made the best Guavaberry. For those that still make it their Guavaberry Rum provides a sense of pride, a continuation of heritage and of Christmas tradition.

Finding Guavaberry Rum on Island: Commercially produced Guavaberry Rum can usually be found in some island stores. Vendors at holiday events sometimes have homemade Guavaberry Rum for sale but most often homemade batches of this cherished drink are shared with family and friends.