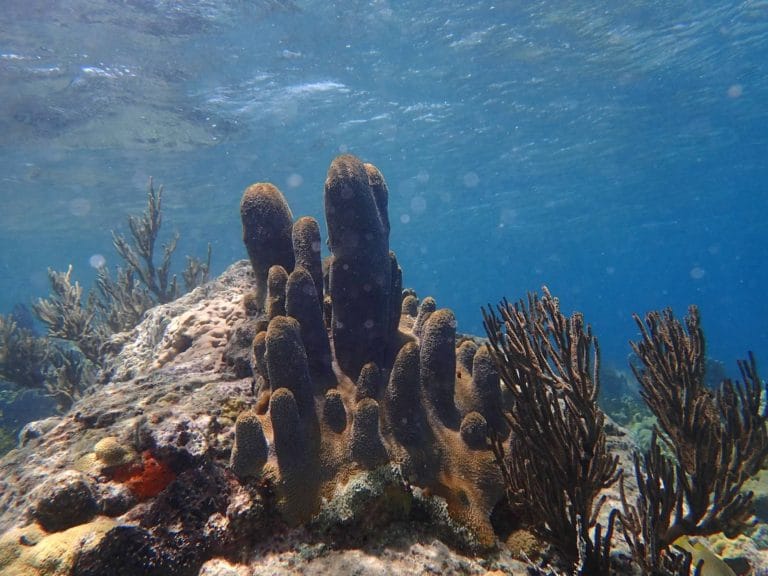 St. John delivers a jackpot of underwater beauty. The island’s waters support a diverse and complex system of coral reefs and other ecosystems. Exploring this fantastic marine world while visiting St. John is a must, and a great option is by snorkeling. Some of you have been asking how the snorkeling sites are doing since hurricanes Irma & Maria; and we caught up with a recent island visitor for her thoughts. Kelli has been visiting St. John for 7 years, and is an avid diver and snorkeler.

VInow: “What are your favorite spots to snorkel on St. John?“

VInow: “Do you have any tips for people snorkeling on St. John?“

Kelli: “A properly fitted mask is essential. Do not touch, kick, break, or stand on coral. You can kill it, or injure yourself. Do not touch, harass, or feed any wildlife. Be aware of your abilities and respect the water as currents can develop or change at any time.“

And here is Part 1 of Kelli’s photos and comments on snorkeling on St. John, from her August 2018 visit to the island. All the great photos are Kelli’s pics! Thank you Kelli for sharing!

“We were finally able to make it around Perkins Cay and over to Hawksnest. It was such a great snorkel. Saw blennies everywhere. To the right of the reef is just brown rubble everywhere in the sand and then I saw one beautiful chunk of blue tunicate and felt hopeful that life and beauty was coming out of the devastation. Headed over to Perkins and right at about 7 o’clock is a large ledge and underneath it were ginormous lobsters and a pretty big puffer fish. The right side had some very large boulders, and was just covered in tunicate and other colorful things, just absolutely stunning. My husband saw a reef shark. The backside was pretty much just boulders with some sponges and things and we came around to more blennies and gobies, an octopus, and then we saw a spotted sea hare!!! We have never ever seen one of these before and we watched it for like 20 minutes, so super cool.” – Kelli 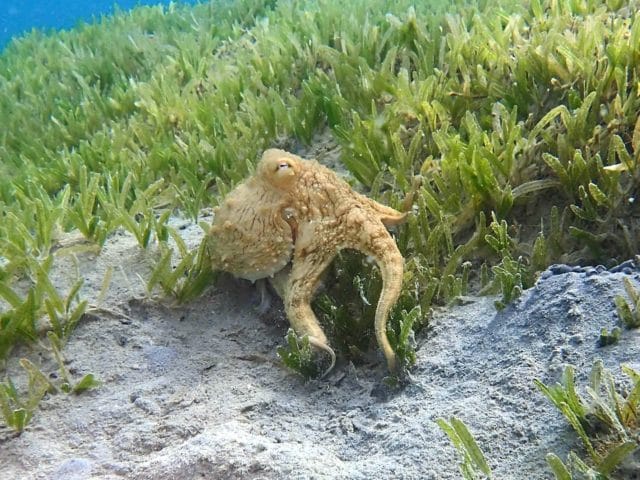 “We saw the most variety of life and several really great rocks of color and little things, a macro lovers dream! I spent about 45 minutes on one rock/coral area taking pictures. Saw a barracuda, shark, Tarpon, octopus hanging out in the grass, green moray eel (Yay!), multiple types of shrimp and Christmas tree worms everywhere and I mean everywhere. Of course there were lots of brown rocks, but this was definitely the most variety that we have seen.” – Kelli

“Swam out to Tektite Point, great snorkel! We always like the algae covered rocks at the beginning and the groups of huge boulders at the points. Beautiful colors. Wish I could hold my breath long enough to get to the deep swim throughs at Tektite, such a cool area. Saw lots of sharks and octopus, 2 turtles, a flounder, and a fisherman at the point dumped some baitfish in and the little fish were going nuts checking them out.” – Kelli 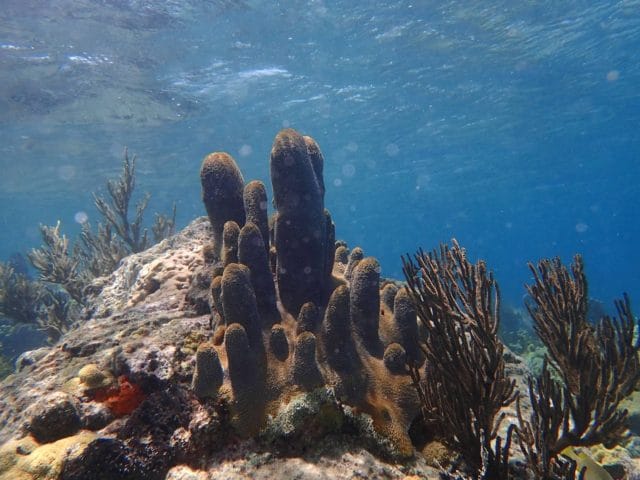 “The first part by the three buoys took a hit, still some fans, soft corals and colorful spots. The grassy area is the same except for lots of huge trees in deeper water, the tip of the point had some good color, but the swim out is all brown, and the backside of the cay was beautiful! Saw 2 of my absolute favorite fish: juvenile trunks. One pea size and one pistachio size!!! Also an octopus, ray, enormous turtle, beautiful purple fans, several barracuda (1 quite large), a lovely corkscrew anemone, and several sharks.” – Kelli 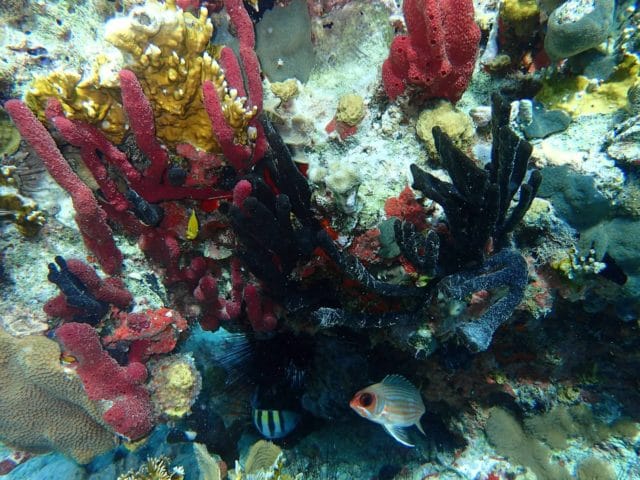 “We have never been to this beach before, so nothing to compare it to, entered the water and swam left and left and left looking for all the good stuff. It was pretty much 80% brown blah. Swam over to the area between Solomon and Honeymoon and it was very nice, most of the things were close to The surface so easy photography. Saw a large school of those yellow fish that always hang together and they were so thick, but I spotted a tail and once I got them to move, there was a small nurse shark sleeping under the ledge. Saw a parrot fish eating a see urchin or trying to get it out of its mouth, not sure which? Also saw a few nice trumpet fish.” – Kelli 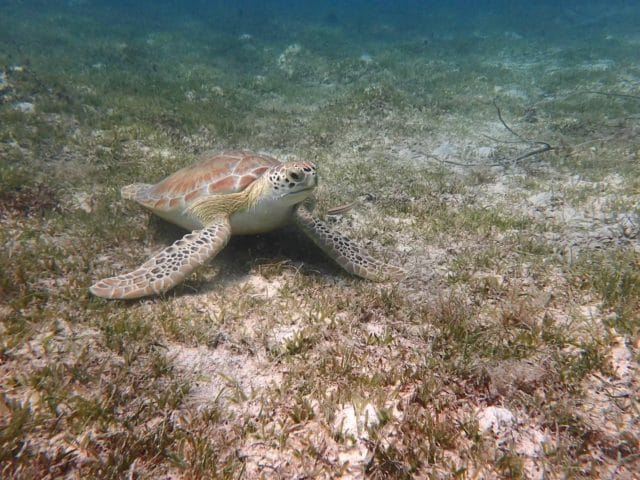 “Both sides are pretty much brown blah, but the point as you head to Blue Cobblestone had a few nicely colored large boulders. We stopped halfway or so to Blue Cobblestone since there was nothing there and headed to the rocks in the center of Salt Pond. Lots of soft corals and a few more fish. Did see a small shark that wasn’t a nurse, but not sure what it was. Saw several turtles and right before our start point was the spotted eagle ray.” – Kelli 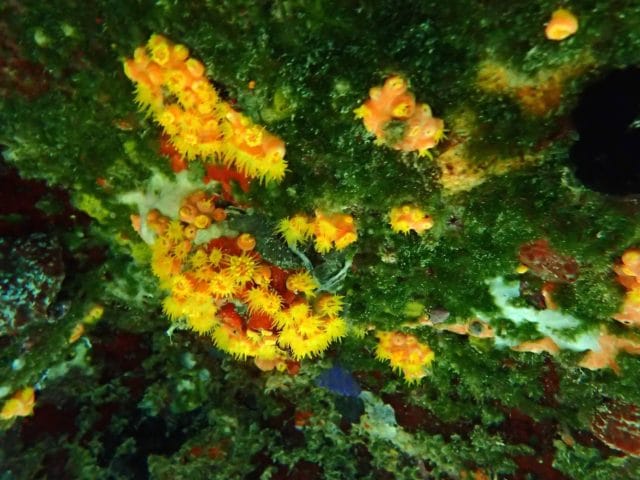 “Boy did that take a hit, lots of the color is gone, but there was a lot of fish activity. We saw two octopus out swimming around, and a school of squid, some large grouper, and in one ledge was some beautiful coloration with orange cup coral with the polyps out, just gorgeous.” – Kelli

Want to learn more about snorkeling on St. John? Pick up a book about the Virgin Islands Coral Reef National Monument located around the island of St. John, a waterproof snorkeling book, or fish id card so you can identify what you see while snorkeling. Visit Snorkeling Guides