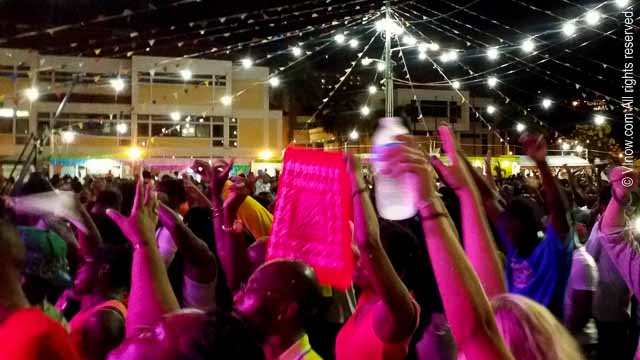 The heart of Carnival on each island is the Village. Carnival Village or ‘the Village’ as it is locally referred to, is made up of colorful booths that sell local foods and drinks. The booths represent local communities and include foods from: Puerto Rico, Trinidad and Tobago, Dominican Republic, Dominica, Tortola and Barbados. The booths are open all evening long into the wee hours of morning. Also part of the Village is a bandstand where local bands perform often on a nightly basis during Carnival festivities. A children’s village is usually located nearby, with a few small amusement park rides, cotton candy and other sweets and Coney Island like games (darts, knocking down milk bottles, basketball – prizes of stuffed animals, posters and the like are awarded).

The grand opening of Carnival Village is filled with anticipation and ceremony as the ribbon is cut by the honoree, the governor of the Virgin Islands and the Carnival Queen (these are traditionally the people who cut the ribbon indicating the village is open). Every year an honoree is selected, their name is used in the title of the village.

Children and adults love the village. Children race from one ride to another, waiting in line for the trill of riding around on the carousel, the Tilt-A-Whirl, the Barrel of Fun or the Surf Rider. Adults enjoy the merriment of meeting friends around the bandstand to catch up on local melee, to listen to bands perform and to enjoy the local foods served in the booths.

Note: Carnival Village is usually open for approximately 7-9 days during the week prior to the parades. 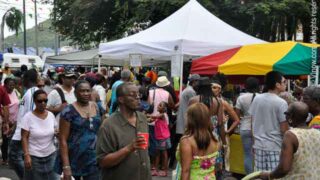 Food Fair is the event for those who love to eat, drink and be merry. Thousands of people gather for food fair, whether it’s in Charlotte Amalie, St. Thomas, in Cruz Bay, St. John or at the Christian Schjang Vegetable Market in St. Croix. Carnival food fair is sure to have fried fish, lobster, jonny cakes, shrimp, beef and salt fish pates, kalaloo, tamarind stew, mango and pineapple tarts, maubi, passion fruit juice and a whole assortment of other Caribbean delicacies.

Food Fair is an exciting mix of local foods and colorful displays of arts and crafts. The food and art fair is made up of many small booths and tables. You can walk through the booths and tables and purchase locally made crafts, arts and paintings or try local food, deserts and drinks. Booths are set up by individuals, as fundraisers for local churches and schools and some are run by local restaurateurs. Local crafts presented at the fair include Caribbean dolls, iguana dolls, handmade coconut birdfeeders, coconut monkeys, paintings and more.

Food and crafts are not the only forms of entertainment at Carnival Food Fairs. There is always music, dancing and appearances from Carnival royalty and political figures. Local bands usually perform steel pan music throughout the event and frequently cultural dance groups perform during the fair’s opening ceremony.

Food Fair is certainly an event worth attending. Walk through the booths savor the taste of Caribbean delicacies and enjoy the locally made arts and crafts.