History of Carnival in the U.S. Virgin Islands 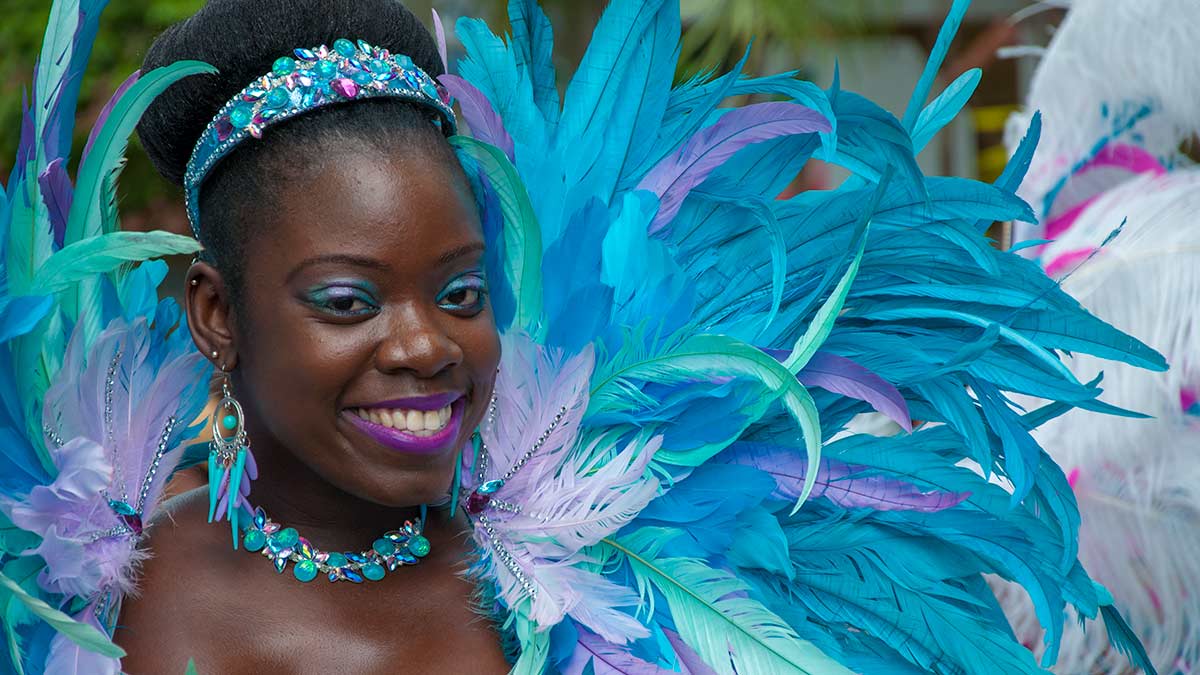 Carnival celebrations as we know them today in the Caribbean, including the U.S. Virgin Islands, are the result of various festival traditions being introduced, interpreted, invented, reintroduced, reinterpreted and reinvented – starting a few hundred years ago.

In the mid-1600s and 1700s Europeans from countries such as Spain, Portugal, France, England and Denmark colonized the islands of the Caribbean. They brought with them the celebrations and festivals that were familiar and naturally tried to replicate the familiar in the New World. European celebrations included religious holidays and came in a variety of forms such as dress balls, parties, house to house visits and street processions. European nations sought the islands for developing plantations and the primary source of labor was enslaved Africans from West and Central Africa. They too brought with them the celebrations and festival traditions that were familiar and tried, often with difficulty, to replicate them. Their festivals were organized around certain deities or spirits, to mark a transition in life or in the community and in recognition of changes in seasons whether related to climate or to agricultural production. They incorporated a variety of forms, quite often including singing or chanting, drumming, masking and a form of street theater with performer and audience participation.

Africans brought to the Caribbean the knowledge of how to make the items they used in festivals like drums and masks, and their uses. With this they could reproduce such items. In the U.S. Virgin Islands (formerly the Danish West Indies) for example, Africans made drums using just a skin stretched over a calabash or a small barrel. An empty pot also did the job. Traditional African drumming and dances however were often feared by Europeans. They thought these might be used to communicate secretly and to plan uprisings. Drumming was often banned and other laws tried to deny Africans of their cultural identity. They were often expected to abandon their own traditions and adopt at least part of the European culture.

Indeed enslaved Africans in the Caribbean were exposed to European celebrations and festival traditions, but they generally were not allowed to participate directly. European planters and their associates celebrated amongst themselves. In some cases missionaries were responsible for introducing religious holidays and related traditions to the enslaved Africans. In the face of being introduced to new traditions and having bans on old traditions, enslaved Africans persevered. They came from different parts of Africa and therefore had different traditions, but they extracted and reinvented things from collective memories. They were able to maintain some of these traditions by fitting them into accepted European festival and holiday framework. During holidays, like Christmas and New Years, enslaved people would usually have time off and an opportunity to celebrate. These times of celebration created momentum for the cultural fusion of the two groups’ traditions and for the development of new ones. African traditions were also maintained through concessions of plantation owners and in secret.

A great example of the cultural fusion that took place is to look at two popular dances considered to be U.S. Virgin Islands folk dances. The (European) quadrille is a popular old-time dance. It is maintained today through dance groups. It is said that plantation owners would occasionally call on members of the enslaved African community, the ones known to be good musicians, to entertain at parties. Perhaps in this way the dance passed along. Another dance once popular and still preserved in the U.S. Virgin Islands is the (African) bamboula. As previously noted African dances and the drumming that went with them were feared and often banned. Historical accounts from the late 1700’s however indicate that talented dancers from amongst the enslaved people were sometimes brought to the plantation house to perform. This shows that the African dance tradition was being maintained, likely in secret and eventually, at least on some plantations, it was accepted.

Music and dance were integral parts of celebrations during the plantation era in the Caribbean. These traditions continued to evolve over time; as did the various periods of celebration. Though most celebrations occurred around Christmas and the pre-lent festival of Carnival some were planned around the agricultural cycle, the end of the sugar cane harvest for example. It is from these various festivals with their creolized music, dance and masquerading traditions that Carnival developed.

Today Carnival is celebrated across the Caribbean. On some islands the festival has endured almost annually since the 1800s. On other islands the 1900s saw various festival traditions being revived into Carnival, often incorporating elements from neighboring islands. Carnival is however much more than a modern festival with remnants of contributing traditions, both European and African. While retaining similarities it has evolved into something that is also different – enough so to be considered uniquely Caribbean.

Carnival in the U.S. Virgin Islands

St. Thomas: The first Carnival in St. Thomas was on February 14, 1912 and the second in 1914 – both while the islands were part of the Danish West Indies. The early Carnival celebrations included activities that are part of current Carnivals like bands, Carnival queen, special games and a parade. After 1914 it would be 38 years before there was another Carnival on St. Thomas. During this time music, masquerading and dancing continued on special days, holidays and other events. Some of these traditions began to lose some ground as they competed with new trends brought to the island by immigration and travel. In 1952 a radio personality named Ron De Lugo was reminiscing about festival traditions. De Lugo sent out a call that there should be a Carnival. Some people in the community did not think it was a good idea, the population was very aware of class distinctions and there wasn’t much social life between them. De Lugo many years later in an interview noted that on Carnival parade day he feared that no one would show up. But people did show up, and Carnival has been going annually ever since. Over the years additional elements have been added. It is currently a three week event taking place in April and is called V.I. Carnival.

St. Croix: St. Croix’s Carnival is called the Crucian Christmas Festival and it became an annual event in 1952 with the revival of old holiday traditions transformed into modern Carnival. Dating back at least to the early-1800s enslaved Africans on St. Croix were allowed to celebrate Christmas and New Years. The celebrations on plantations included drumming, singing and dancing. In the main towns it involved parading through the streets of town singing, dancing and playing drums; often stopping door to door for rum and wine. Masquerading was popular during Christmas and other holidays including Easter and Whit Monday. These traditions continued into the early 1900s but saw some decline. Social events kept music traditions and dances like the quadrille, lancers and bomboula alive. The Carnival festival collected traditions into one big event with a focus on the former holiday celebrations. The event has become more and more organized each year and has incorporated additional events. Today it last about four weeks starting in December and ending with the parades in January.

St. John: The Carnival celebrations on St. John have triple celebration power. It is Carnival and it takes place during two important holidays; Emancipation Day – a local holiday commemorating the abolition of slavery and 4th of July/Independence Day – the U.S. holiday commemorating independence. In 1960 the 4th of July celebrations on St. John evolved into Carnival and the festival lasted more than a week. Today the event last several weeks and culminates on the 4th of July. It is called the St. John Festival.