Pelicans are large aquatic birds with long bills. They feed on schools of small baitfish and can often be seen swooping down and diving into the sea. They resurface with about a gallon of water and hopefully fish in their large pouch. They sit at the surface letting the water drain while the fish remain trapped and get eaten! They are fun to watch and can often be seen at the beaches and coastal areas around the Virgin Islands.

The brown pelican is found throughout the Caribbean and is said to nest in very distinct areas of the Virgin Islands; including Mary’s Point on St. John, Congo and Whistling cays off of St. John and Buck Island off of St. Croix. The effects of poaching for eggs, young and adult pelicans, disturbance of nestling colonies by humans and reduction of food resources have caused the pelicans numbers to decline. The brown pelican is found in the Virgin Islands and is federally endangered.

The Sea Gull is also known as the laughing gull because of its clear ‘ha, ha, ha’ call. It is a medium sized bird found worldwide. These webbed feet birds are usually found near water in the Virgin Islands and are particularly common in areas where fishermen clean their catches. Their feathers are white, gray and black. They are omnivorous birds, however they often scavenge. They are often seen stealing fish from pelicans; so daring are the sea gulls that they sometimes take the fish right from the pelican’s bill!

Hummingbirds are small, quick birds. Commonly found in the Caribbean and parts of North America. They are usually brightly colored. They feed on nectar from plants and small insects caught in flight. You will find these delightful little birds flying around the flower beds of homes and resorts in the islands. The bananaquit is often called ‘yellow bird’ account of its bright yellow chest and ‘sugar bird’ on account of its affinity to sweets. Homes owners in the Virgin Islands often hang bird feeders with sugar or with sugar water for the bananaquits! 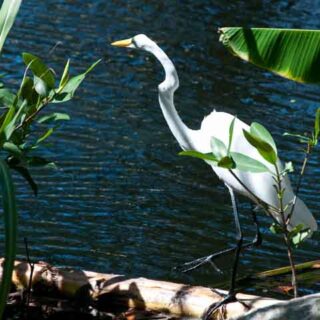 The Virgin Islands is home to the great blue and little blue heron. The great blue heron stands 3 feet tall with a wingspan of approximately 7 feet. It is a slate blue color and is a graceful wader and often stands motionless while fishing. It eats fish, crabs, lizards and mice. The little blue heron is also an elegant wader. It is common to see these birds around salt ponds, on mangrove islands and in lagoons. The young herons are snow white before their first molting.

The cattle egret was first reported in the Caribbean in the late 1930’s. Standing about 20 inches tall the snow white egret eats small insects and lizards. It is often seen in cow pastures around the Virgin Islands, often standing on the backs of cows.

Various species of doves are to be found in the Virgin Islands. The cooing Zenaida dove is quite similar to the American mourning doves and are commonly found and often heard in the islands. Not commonly sighted is the bridled quail dove. When it is seen it is usually searching for seeds on the ground in densely forested lowlands. It is an endangered species primarily because its eggs and young are eaten by feral cats and mongooses. Additionally development of lowlands have heavily disturbed their feeding and nesting areas.