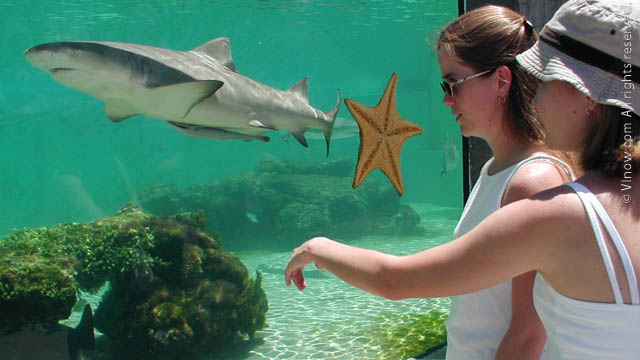 The waters around the Virgin Islands are home to an abundance of corals, fishes, sharks, dolphins, turtles, crustaceans and a multitude of other marine life. The underwater world is truly magnificent and awesome; below you will find just a few examples of the animals that you might see while snorkeling or diving in the Virgin Islands.

Parrotfish are a colorful fish. The jaw teeth are fused into a parrot-like beak, which they use for scraping algae and coral growth from reefs. It is not unusual to hear parrot fish munching on coral while you are snorkeling above them.

Barracuda are identifiable by their long, silver, cylindrical bodies. They have razor-like teeth that protrude from their jaw. They often swim alone or in small groups. They are somewhat shy but are attracted to shiny objects. 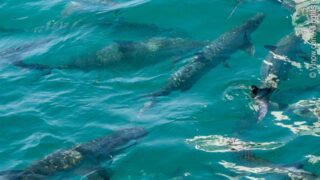 Tarpon are the largest member of the Herring family. They are large, silvery fish that feed on crabs and small fish on reefs and in shallow flats, at night. Tarpon are known to leap in the water in pursuit of prey.

Coral polyps are about the size of a match head. They feed on plankton with tiny tentacle arms that encircle their mouths. Coral polyps secret calcium which builds up and forms coral reefs, which can sometimes be miles deep. They are found in colonies in warm shallow seas. Coral reefs are very fragile; being touched or bumped usually destroys that area of coral. One should use extreme care when snorkeling around coral reefs as it is possible for you to injure them and for them to injure you. There are also forms of soft coral which do not build or live within a coral reef; they are called gorgonians. Gorgonians usually resemble plants; an example is the sea fan.

Starfish are star-shaped marine invertebrates. While they are unusual they are well-known. Their uniqueness is that they have no front or back; they can move in any direction without turning around or turning at all. Sometimes you can find starfish along the sandy bottoms of beaches or in tide pools along shorelines. Please do not remove these animals from the ocean, they are not souvenirs. 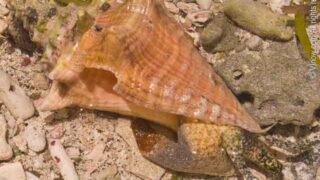 Conch is a large marine gastropod mollusk found in shallow waters of the Caribbean. They generally live in sand, grass beds and in coral reef habitats. The heavy shell of a conch is formed by the buildup of calcium carbonate and is usually pink, orange or yellow on the interior. While the conch’s shell reaches its full size around age 3 it does continue to add to its shell in the form of a lip that flares away from the shell. Queen conch is right handed; if you look at the pointed crown of a shell the spirals coil to the right. A conch can grow up to 12 inches in length and can weigh up to five pounds. They can live up to 40 years but on average live between 20 to 30 years.  Conch is a specialty in restaurants and in Caribbean cuisine. After years of over fishing a moratorium was put into effect and there is presently a conch season and fishing laws that protect the queen conch in the Virgin Islands. 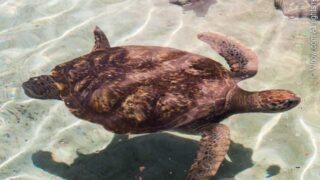 Lobsters are a large marine crustacean. Lobsters usually feed at night on mollusks and carrion. They can get up to 2 feet in length. They can be found in holes and crevices in shallow coastal seas. Edible lobsters are caught commercially using pots or wickerwork traps.

Morey Eels are easily identified by their long, thick, snakelike bodies. They come in a variety of colors and patterns and tend to stay in dark corners and recesses of coral reefs during the day. They can sometimes be seen with their heads poking out of holes and cracks. Do not put your hand near the eel or into its hole. While morey eels are not aggressive they will bite if they feel threatened. They have very sharp teeth and give a nasty bite.

Sharks are a member of a large group of active, predatory, cartilaginous fish. Types of sharks include nurse sharks, black tip sharks, hammerhead sharks and leopard sharks. Although there are sharks living within the waters around the Virgin Islands the likelihood of you seeing one is rare. On reef dives and sometimes while snorkeling it is possible to see nurse sharks; most other sharks avoid reefs during the day. Many shark species are shy but occasional attacks do occur. Over the past century only 4 shark attacks have been reported in Virgin Islands waters. 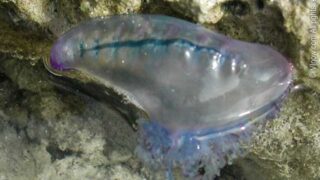 The moon jellyfish has a dome shape with tentacles on its underside. It resembles a translucent shallow bowl of jelly turned up side down in the water. This jellyfish is generally considered harmless and some people actually touch the dome side however be very careful of its underside and tentacles as they will sting. There is also a sea-wasp jellyfish that exist in the waters of the Caribbean. It has a small bell shaped body and long tentacles and is potentially dangerous.

Sting rays are flattened, diamond shaped, cartilaginous fish with a short, thick tails and wide “wings”. The mouth and gills are located on the underside of the ray. Rays spend most of their time resting on the bottom of sea in shallow waters covered partly with sand. They are harmless unless stepped on. Sting rays have one or two venomous spines at the base of their tail which they will stab with if stepped on. The wounds are very painful.

Whales are a large aquatic mammal. They breathe air through opening(s) on the top of their head. There are two major groups of whales: toothed whales and baleen whales. Toothed whales include the killer whale, sperm whale, dolphin, and porpoise. Larger baleen whales include rorquals, grey whales, and right whales. In the waters around the Virgin Islands it is possible to spot dolphins from time to time. Whale watching is common and popular in the waters around the Virgin Islands in the winter months.