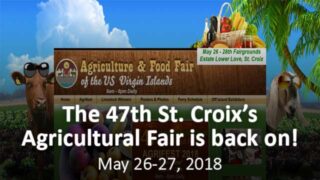 Important Note: The 47th St. Croix’s Agricultural Fair is back on! It is typically held in February and was initially canceled due to the damages caused by Hurricane Maria. The community responded requesting that the annual event still be held. The date was therefore moved to later in the year to allow time for farmers to recover and replant some of their crops. It’s now scheduled for May 26-27, 2018.

The Annual Agrifest on St. Croix offers residents and visitors a wonderful opportunity to explore island culture through its savory food, captivating music and fun activities. The event typically last for three days in February. The territory’s agriculture takes center stage during this event. Agrifest is usually very well-attended. It is the largest agricultural expo for the islands. It attracts farmers and craftspeople throughout the islands, and includes live music, an extensive farmers market, a crafts fair, cooking demonstrations, livestock and horse and donkey rides.

Hurricanes Irma and Maria devastated the islands landscape and of course gave a serious blow to farms. Two months later; some trees have leaves, new branches and in some cases flowers, but fruit trees take longer to recover and crops have to be replanted.

Farmers lost trees, crops and livestock during the hurricanes. Additionally the VI Department of Agriculture’s offices and other buildings were damaged. Farmers in the Virgin Islands are struggling in the recovery period. Some farmers lost equipment that they now need to clear the debris on the property; others lost parts of their homes and must attend to that first; and some have been unable to plow their fields because the ground is so saturated from record rain fall over the last few weeks. Local bee keepers losts many of their hives in the storms. Farmers are optimistic they will receive help. While waiting for it they have started replanting as best they can, relied on volunteers to help, and received some donations from the community and their customers. Some farmers hope to have limited fresh food stands back up and running very soon; but the farmers recognize that they are essentially starting all over again, and recovery will take a long time.

Reichhold Center for the Arts

Sign up to receive Virgin Islands articles, updates and offers.