Frederiksted is a picturesque water front town. It was established in 1751 and it is the second largest town in St. Croix. It is a lovely historic town that is easily explored in one day. Federiksted is built in a Victorian style; this was the style chosen after the original buildings were destroyed in a fire in 1758. Centuries ago Federiksted competed with Christiansted as a port of trade; Christiansted became the more important of the two. However, Federiksted would also have its day of glory and it’s mark in history. The fort at Federiksted fired the first foreign salute in honor of America in 1776. It is still called the Freedom City, a name it earned as an ally to the British colonies that became America.
Filters
3 results - showing 1 - 3
Ordering
5.0 (1)

A National Historic Landmark, the red and white Fort Frederik was built in the 1750's to ward off pirates.... 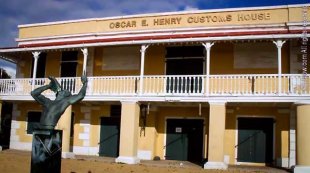 There are many historical buildings in Frederiksted that have been converted into offices and stores. The one photographed here...

The area right in front of the Frederiksted fort and waterfront has been made into a beautiful town park....

Sign up to receive Virgin Islands articles, updates and offers.