Christmas Trees in the Virgin Islands 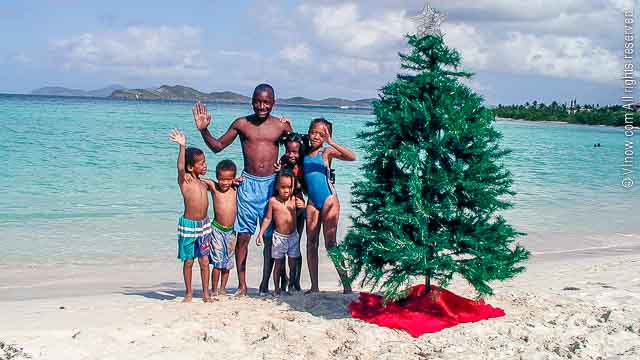 For many people, including residents of the Virgin Islands, these lyrics bring to mind a beautiful green fir or pine tree with twinkling lights and an assortment of decorations.  In the islands starting around Thanksgiving a few grocery stores and hardware stores carry pine trees. Also, trailers pop up in popular areas; for example outside a laundromat or down the road from a grocery store. Hanging on the trailer a handmade sign or printed banner announces, Christmas Trees for Sale.

Imported pine and fir trees, both real and artificial, are the popular choice for a Christmas tree in the Virgin Islands today, and they have been for several decades. But they weren’t always. The Virgin Islands had its own special tree used for Christmas, the inkberry tree.

The inkberry tree, also called box-briar, fishing rod tree and indigoberry, is a slightly spiny shrub. It typically grows to around 10 feet, but in good conditions can grow up to 20 feet. The leaves vary in size and shape from .5 to 1.5 inches long. The shrub grows well in full sun and rocky soil; and they are drought, wind and salt tolerant. Their branches are strong and with the twigs and thorns stripped off they were used as fishing poles in the Virgin Islands in the old days.  Their special use however was as a Christmas tree.

Inkberry trees grow wild in the forest covering the islands. Typically people would start scouting out hillsides for their tree as the holidays drew near. Young people would get together and explore well forested areas looking for a tree. Once the right tree was found it would be cut down. Cutting it down and bringing it to the house required care as the tree has spines. A biscuit tin or wooden tub would be given new purpose as the stand for the inkberry Christmas tree. Rocks would be used to steady and secure the tree.  The tin or tub would be decorated with pretty paper or cloth. Small candles were attached to spines and twigs, and decorations were made of colored tissue and crepe paper. Strips of fabric were saved when making clothes during the year for use in making small decorations. Colored balls, if available, would also be used.

In the 1960’s another local plant gained popularity for use during the holidays and today it is also reflected on as a traditional Christmas tree. This is the century plant, or rather a century plant’s flower stalk. Some people say the tradition was started by island residents from the U.S. mainland. Some suggest that retailers started using them in shops. And others note that inkberry trees were getting hard to find. Whatever the case might be, at some point the beautiful stalk caught the eye of someone in search of a Christmas tree and that got things going. 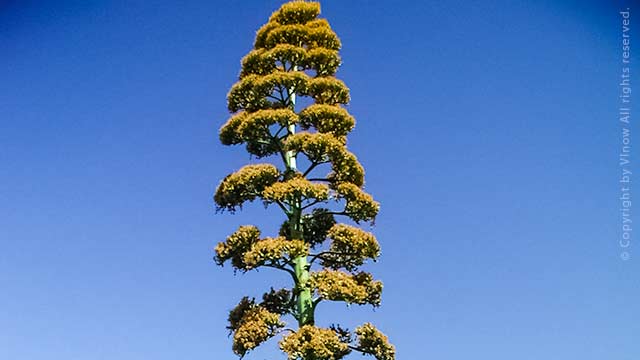 Locally known as century plant or karata, is a species of agave whose natural range is the Virgin Islands and Puerto Rico. The plant has no stem. Its large gray-green leaves can grow up to 6 feet long and 10 inches wide. The leaves are spiny on the sides with a heavy spike at the end. The plant is drought, wind, sun and salt tolerant and is typically found in dry areas of the islands.  The name comes from a misconception that it blooms once a century. The plant actually blooms between 10-20 years, however it only blooms once and then the plant dies. When ready to bloom the century plant focuses all its energy on the rapid growth of the flower stalk. The stalk is said to grow up to 5-6 inches a day and can reach over 20 feet. Once the stalk reaches maturity it produces branches that bloom with bunches of small yellow flowers. Century plants usually bloom in late spring or early summer. By Christmas time the stalk is brown and dried out. The stalk would be cut down, brought home and typically spray painted gold or silver. It would be propped up in a container filled with rocks to steady it, and then decorated.

Today one might see a century plant Christmas tree in a shop, museum or in a public park; also some families still use them. The inkberry tree is also still used by a few families, but for most it is a fond memory of old time Christmas traditions in the Virgin Islands.

Did you know: The British Virgin Islands released four Christmas Stamps in 2005: one featured the century plant stalk Christmas tree and another featured the inkberry Christmas tree. Also featured were the poinsettia and snow on the mountain; flowering bushes synonymous with the holidays.