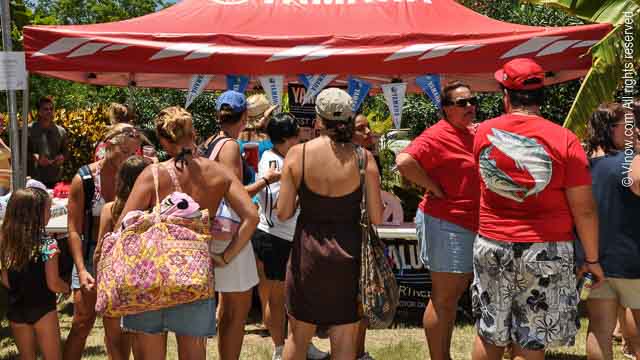 People dance, fish, eat and have a great time at the Bastille Day Celebrations on St. Thomas. Bastille Day, celebrated on July 14th, is the national holiday of France. It is the equivalent of America’s July 4th Independence Day holiday. Bastille Day is celebrated on July 14th because on this day in 1789 the people of Paris rose up against the government of King Louis XVI and captured the fortress of Bastille. This capture symbolized a new feeling of freedom, which spread throughout France and led to the establishment of a new popular government. Bastille Day is celebrated in France and French territories with dances, parades, music and rejoicing.

St. Thomas is home to a large population of French people, descendants of immigrants who came to St. Thomas from St. Barthelemy (a French island in the Caribbean) between the 1920’s and present. This community, many of which were born on St. Thomas, celebrates its French heritage throughout the year with various celebrations including French heritage week and Bastille Day in July.

Bastille Day celebrations usually start on the weekend of July 14th with music and dancing. These dances are generally held at one of the popular bars on the north side of St. Thomas like Bryans Bar and Hull Bay Hideaway or Frenchtown at the Joseph Aubain Ball Park. Local bands from the French community like Obsession Band and Sea Breeze usually play. In the past, bands from St. Barthelemy have been invited to participate in the festivities, much to delight of the French community. Music, food, drinks and dancing start in the early evening and often last until the wee hours of the morning.

The big celebration day is July 14th – Bastille Day, however traditionally the Bastille Day Kingfish Tournament the pinnacle of the celebrations, is held on Sunday so that all can come and enjoy.

The Kingfish tournament, sponsored by the Northside Sport Fishing Club, begins at 5am at Hull Bay. Fishermen and women cast their lines at 5:30 am and have to be back at the beach by noon to have their catches compete in the tournament. Starting at 11am anglers begin bringing in their catches. Some people bring in large kingfish and barracudas while others bring in nothing. People wait excitedly at Hull Bay Hideaway to see the anglers and their catches come in.

The tournament was first organized in 1987. Today it attracts some 350 anglers and over 100 boats. The tournament is a fundraiser that benefits local schools and public service organizations like the Red Cross. Anglers are drawn to compete for fun and for prizes.

Adults and children complete in the tournament. The angler who catches the largest, 2nd and third largest kingfish is awarded prize money. The best captain is often also awarded a prize. Prizes are made possible by donations from local businesses. Other prizes go to the largest jack, tuna, bonito and barracuda. There are awards for best boat, best female and male angler and best junior anglers.

The dancing, eating, drinking and celebrations begin at noon when the anglers have brought in their catches and the festivities continue into the early evening. Lots of fun to be had – if you are on island, do join in participating in a local event is a rewarding vacation experience!