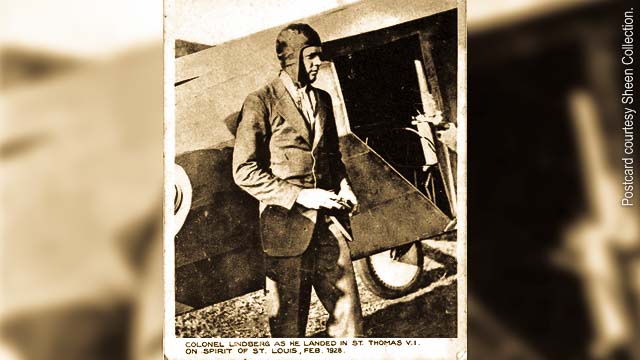 If you were on St. Thomas 88 years ago today you would have had a chance to see the famous American aviator, Charles Lindbergh. His Spirit of St. Louis flight log for January 31st, 1928 has him traveling from Caracas, Venezuela to St. Thomas; and then on February 2nd, 1928 from St. Thomas to San Juan, Puerto Rico. His stop in the Virgin Islands was part of a victory tour of the Americas and the Caribbean after completing the first solo non-stop flight across the Atlantic. His tour of the region created a stir at each stop, and St. Thomas was no different.

The islands’ leader at the time was Governor Evans. He’d sent radiogram messages to Colonel Lindbergh extending a warm invitation that the aviator stop in the Virgin Islands. The invitation was accepted and the government and community swung into action to find a suitable landing area. There were two areas considered, Sugar Estate and the golf course at Mosquito Bay. After flight tests were conducted Mosquito Bay was selected.

The community was excited about the visit of the American aviation hero. The town was decorated and receptions were planned. On the day of arrival people gathered at Mosquito Bay in great numbers to watch the Spirit of St. Louis land on their little island. So great was the excitement around Lindbergh’s visit that there was talk that Mosquito Bay should have a new name. And so it happened soon after Lindbergh’s visit that the property owner officially changed the name from Mosquito Bay Estate, to Lindbergh Bay Estate.

What are you going to find in Lindbergh Bay Estate today? There are many homes, numerous businesses, a couple hotels, the airport, and the beach! Lindbergh Bay Beach is a beautiful white sand shore, with crystal clear blue water, coconut trees swaying in the breeze, a few beach bars and hotels.