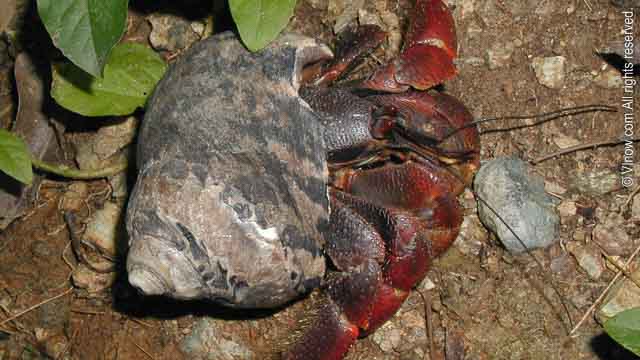 Pick a crab, pick a name, put the crabs on the track, sound the horn and then they are off! You got it, crab racing, that is hermit crabs not to be confused with land crabs or water crabs.

What is a hermit crab?

Hermit crabs are land living crabs. They have soft abdomens which require the protection of a shell. They do not make their own shell, therefore as they grow they must find larger shells to occupy. Their lives are spent searching for and occupying shells of other animals. The hermit crab in the picture is donning a whelk’s shell.

I had the great fun of attending a crab race over on St. Croix a short time back. I had heard of them but never had attended an actual race, so with anticipation I climbed the steps at Stixx to look for the action and to look as well for Tito and Sue, the folks that host and produce the races. There were lots of families, folks eating pizza and drinking beer, lots of children standing in line pulling on Mom’s hand and whispering the great winning crab name they had come up with; smiling when they received Mom’s approval. There were adults in the line too for this fun activity is definitely not just for kids!! And so folks lined up in front of Tito who sat with a bucket of hermit crabs in front of him. Each eager contestant when arriving to the bucket gleefully reaching in to select one, two or three crabs that they wished to claim, hoping their choice would be a quick ‘runner’, win the race and win them a prize! With crabs selected the contestant then told Tito the name they selected for their crab which was written on a bit of tape stuck on the crab’s hard shell and also written on a notebook with the contestant’s name. When all bets were in, the smaller children sat around the racing circle, adults behind them: all in attendance of course were in tense anticipation. The crabs were placed in the center of the racing circle and the race was on, hermit crabs climbing over each other and racing outwards to the finish line – quicker then you would think! Winning crabs were collected and put in one bucket, those not to fast to the finish line collected in a second bucket. Several rounds continued in the same manner, until about a dozen winning crabs were selected and those who had bet on them were called up to receive their prizes.

Crab racing is not new to St. Croix; it is a traditional game or pastime that has been reawakened to some extent by Tito and Sue and by others who host such races. Crab races occur weekly so if you are visiting or moving to St. Croix be sure to find out when and where the crab races are and attend. Be sure to bet on a crab as the prizes are great; free charters, free dinners, free t-shirts, free booze, gift certificates for shopping, certificates for ferry and seaplane service to island hop to another island and much more!!