David Hamilton Jackson was a labor activist and an advocate of free press. He played a key role in St. Croix’s labor rights movements in the early 1900s, when the island was part of the Danish West Indies. He started the first free press newspaper, sought better conditions for the Black working class in the islands, was influential in gaining local support for the sale of the islands from Denmark to the United States, and played a strong role in the development of the U.S. Virgin Islands. He is remembered each year on David Hamilton Jackson Day, a Virgin Islands public holiday since 1981. The holiday is November 1st and is also called Liberty Day. Liberty Day is a celebration of free press in the islands which Jackson himself designated in 1915 when he published the first free press newspaper in St. Croix, The Herald.

David Hamilton Jackson was born on September 28, 1884 on St. Croix, Danish West Indies. His education began at East Hill School where his father was the principal and his mother a teacher. It is said of Jackson that from a very young age he was interested in the issues of the day and was willing and able to take a stand and defend his positions. Jackson, in adulthood, would go on to have a prominent role in the social, economic and political development of the island.

Jackson started out following his parent’s footsteps. The 1911 census lists him as a teacher. His outspokenness later results in his being dismissed from this position. He goes on to be a bookkeeper. His talents in speaking and effective communication lead him to what he is best remembered for in the Virgin Islands – a community leader and activist for the working class.

Newspaper announcements from around 1914-1915 note D. Hamilton Jackson lecturing around the island of St. Croix. He agitates and instructs the working class and demands for them better living conditions and better pay. He also offers criticisms of conditions on the islands in his lectures and to newspapers.

On April 15th, 1915, David Hamilton Jackson traveled from St. Croix to Denmark. He stayed in the country for over two months and met with politicians, the king, the press and he lectured at public gatherings. He spoke on behalf of the working class in the Danish West Indies. In Denmark, Jackson demanded “an improvement of living conditions including the creation of smallholdings, freedom of expression, better housing conditions, an open legal system, an opportunity for further training in Denmark and suffrage for all men over 25. He also demanded that the governor of the colony at the time, L.C. Herweg-Larsen, be replaced”. (The Danish West-Indies – Sources of History 2017)

David Hamilton Jackson’s trip to Denmark resulted largely in vague non-binding promises from Danish politicians. He did receive permission to publish a newspaper. Since 1779 the Danish government had strict censorship on all publications in the islands. There was an ordinance authorizing only government subsidized newspapers. Jackson’s success in having the censorship removed gave way to The Herald, the first free press publication on St. Croix.

When Jackson returned to St. Croix in September 1915 it is said he was received as a hero. The high hopes of change as a result of his visit to Denmark soon proved to be unfruitful, as little change occurred. Friction continued between the population of the islands and the Danish authorities.

The Herald and Liberty Day

David Hamilton Jackson starts a newspaper, The Herald, after returning home from his visit to Denmark. An article in the West End News and in the St. Thomas Tidende in November 1915 speaks to the events related to Jackson and The Herald. It says that Jackson distributed free copies of his first issue of The Herald on October 30th. And continues that at his lecture on October 31st instructs his audience to come to Christiansted the following day, rather than going to work, to celebrate the birth of their newspaper. The article suggests that most laborers from estates and many from town went to celebrate. And at this celebration Jackson proclaimed the 1st of November in the future a public holiday to be known as Liberty Day. The article in the West End News describes this event and Jackson with criticism for inciting the people.

In the first edition of The Herald on October 29th, 1915 an announcement portrays a slightly different picture. The announcement states that there will be a celebration of free press and The Herald beginning at 2pm and lasting into the evening with a scheduled program of events. The announcement adds a note to be orderly and to avoid the rum shops that day.

The Herald was the voice of the struggling working class, a place to expose corruption and a method of educating the laboring class until 1925. Jackson was occasionally called in contempt proceedings for criticisms he wrote in his editorials on the situation in the islands and of people in positions of power.

A quote from the first edition of The Herald: “Our aim shall be, first and foremost to preserve the public from outrages and to see that justice is administered with equality and to crush the tyrant wherever found. We shall endeavor to promote a better felling between the two factions, and hope finally to create a United Santa Cruz, and a new people, bonded in love and union.”

Also occurring in 1915, Jackson co-organized the first labor union on St. Croix. Advertisements in The Herald in late 1915 state an intent to form a Great Labour Union, for the purpose of regulating the social depression in the island. Jackson serves as president of the Labour Union of St. Croix. The union allowed laborers to use organized protests and discussions for seeking better work conditions and higher wages in place of the physical uprisings of the past. It is said that it became the single most influential organization in the struggle for better conditions on the islands.

The first general strike took place between January 24th to February 26th, 1916. It was a struggle for better conditions for workers on the islands, headed by David Hamilton Jackson and organized by the Labour Union. It was a challenging time, but it ended in victory for the workers. The workday of sunup to sundown was reduced to 9 hours and workers were given a raise from 10-20 cents, to 35 cents per day.

The business sector and government officials on St. Croix considered Jackson a ‘troublemaker’. Amongst the people however, his commitment against strict labor laws that confined free people to work for a few landowners in poor conditions immortalized him as a leader and hero.

In Favor of U.S. Purchase of the Islands

When Denmark was considering selling the islands to the United States Jackson lobbied in favor of it. He was frustrated with the empty promises of reform that the Danish government had always given, and he led the way to gaining support in the community for the transfer of the islands.

Jackson as a Lawyer, Judge and Legislator

Jackson pursued a degree in law in the United States between 1917 and 1921.

Jackson served on the Colonial Council of St. Croix from 1923-1926 and on the Municipal Council of St. Croix in 1941 and 1946. During these terms he often served as a spokesperson. In the latter post Jackson traveled to the nation’s capital to speak on pertinent issues affecting the new U.S. territory, like citizenship for the islands’ people.

He served as a judge of the Municipal Court of St. Croix from 1931-1941 and was privileged to have played a role in the development of the 1936 Organic Act, the body of laws that gave the territory a measure of self-government over internal affairs. He was the first Chairman of the St. Croix School Board. It is said that in his private law practice he often provided free legal services to his people.

An annual event celebrating Jackson on November 1st is held in St. Croix by the Grove Place Action Committee. The event typically includes music, speeches and a meal of roast beef, stuffing and bread. The beef and bread tradition, according to local legend, is a carryover from a 1915 celebration of The Herald being published. The story that is told is that a beef and bread meal was shared with attendees of the celebration. The meal was therefore incorporated into modern celebrations of the holiday and resulted in the holiday being commonly referred to as “Bull and Bread Day”. 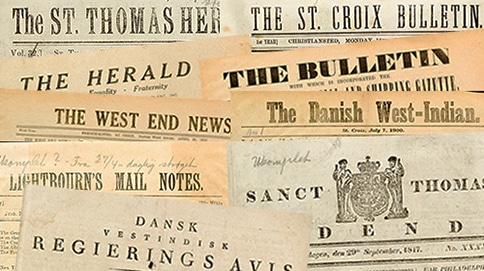 Where you can read The Herald