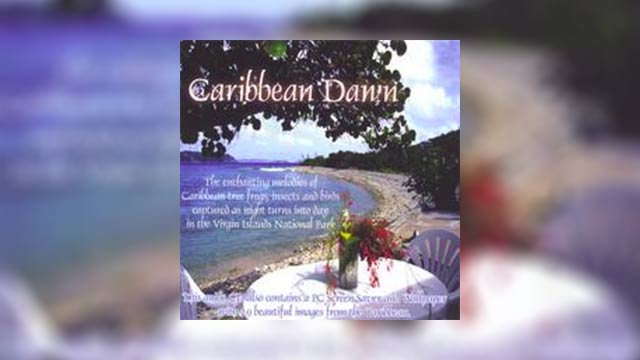 If you have ever lived or vacationed in the Virgin Islands and sat outside in the late evening you will certainly remember the pleasant sounds of island nights. The crickets, tree frogs, bats, birds and other nocturnal creatures; together perform a magical symphony.

Part time residents of St. John Ed and Laurie Boakes found the sounds to be so enjoyable they digitally recorded them and have produced a delightful and relaxing album, Caribbean Dawn.

Ed Boakes explained, “My fascination with the sounds of tree frogs began in the 1980’s when I first visited the Virgin Islands and heard their alluring calls. As an acoustics engineer for Bell Laboratories and part-time musician, I tend to pay close attention to sounds that are around me  and have always been interested in creatures that spend the night singing.”

The Boakes, after numerous trips to St. John, recorded the nighttime chorus and played the recordings for friends who encouraged the couple to put the sounds together; and they did.

In 2003 Caribbean Dawn was released. It is a commercially produced and packaged CD that contains one of the Boakes’ favorite hour-long sessions. It includes not just tree frogs but also the subtle melodies of birds awakening as dawn approaches. This session has neither sounds of civilization nor any added sounds whatsoever. In creating Caribbean Dawn the idea was to share not only the fascinating sounds of the islands but also the delightful beauty; 29 beautiful Caribbean photographs are included on this CD as a screen saver and PC wallpaper. The vast majority of the photos were taken in the Virgin Islands.

The male tree frogs sing to attract females. They only sing when they feel that the environmental conditions would support eggs and allow the eggs to stay moist. Very few will sing when it is dry out; but they will sing in large numbers after a rain, particularly after a series of showers. The males create their song by moving air back and forth between their lungs and a distendable air sac below their mouth. Though fascinating to watch, they are difficult to find, for they are less than an inch long and tan; blending in well with most foliage. The timing of their calls is distinct and planned. When a frog joins the chorus, he will identify a period when no currently singing frog is vocalizing and “take over” that “unused” time slot, resulting in a group of frogs who sing in the same sequence for quite some time.

Order Caribbean Dawn today and enjoy the peacefulness of the Virgin Islands National Park forest. The fascinating tree frogs, crickets, birds and other nocturnal creatures create an amazingly tranquil symphony of sounds. The CD is perfect for meditation and relaxation.